Hi community, how are you all doing? : )

A week from now I am going to remove the block of writing about skills in groups of colors.

This piece of writing has been changed a number of times by a number of authors, but it has never been useful and it is confusing. This is largely because the color groups themselves are confusing and not useful.

If you have anything to say about this feel free to add your thoughts to this page.

Hey all, I'm droping Fwission's administrator rights. He has 0 edits, has not loged in this year and no one here knows him.

Hey all, we have been talking a bit about the skill 'Hyperactive ' or 'Hyperactif' (french) and this has brought up a new topic. What do we do when there is a mistake in the game? Do we copy the mistake or do we correct the mistake? Would our new correct and un-matching item be the mistake? I don't mind what we choose to do but I would like us to all tackle problems in the same way. Personally I would like to copy the mistake and add a note in the page about the mistake, later changing them as Motion-Twin makes it's own changes.

Hey guys, please don't use Seppu's Skill Sheet as evidence of anything.

This skill sheet is younger then our wiki and was made from a muxxu forum thread where we gave him the answers to the skills he was missing without giving any evidence.

Also the information we find on this skill sheet is different to other skill sheets and who are we to say which one is right without evidence.

Unlike all other skill sheet (which maybe only passing and spreading rumors) our wiki has a chance to clarify the information and I would like us to stick with that standard. Thanks

However, I believe that the icon'd be better be pun into header, in line with the 1st column with no caption. But I'll probably break something if I temper with inclusion conditions myself. Once it's moved I suppose I can sort widths, bordering and alignments out. :P

I think we should come to some agreement on a uniform look for the skill pages, we can use the 'Layout Builder' feacher to make a new page format to be used for any future skill addons to the game.

To start with I suggest this series of titles...

(Then any additional information from editors.)

I also suggest that we make a mock page that we can look over, talk about and keep changing. Once we have a conclusion that we are all happy with we can change the other pages to fit the uniform look.

To free the word 'note' I will rephrase any writing that is currently over using it.

Tried to edit with a single layout in mind but there were always tweaks now and then.

I don't think we need to put quotes under separated sections, they are insignificant and work better as a fluff intro for descriptions. Too bad multi-line ones have so much blank space between the lines, looking too odd. As for descriptions, in-game ones are often too vague and leave too many questions, might as well wire them with quotes, and use refined ones instead. No good if you come to wiki for details and see only standard descriptions and quotes. Skill icons look better to the right as they don't interfere with the left border of text that way.

For the most part, I don't think we can always follow the uniform by the word, there are occasions when information given doesn't exactly fits the uniformed title. For example elaborate overview can pass as analysis while a few comments cannot. In that case "Notes" can be the best universal pick. No need for "Editors' Note" as notes are added by editors as it is. The problem is how to organise the info right, some look good as paragraphs, the others as lists. With too few notes they can go fine attached to descriptions.

"Other Media" should be fine just as "Media" (or "Gallery" if you like), not too much media around in most articles.

My take on it is that the layout needs to be organised in a similar fashion, but customized basing on the information available, to make a solid piece. However, default template should have a standardised look we're discussing now here.

Tried to get it somewhat closer to the game in terms of colours and backgrounds. Thoughts on the change? Can be reverted or altered if necessary.

Thats pretty professional KM! It feels like I'm still in the game when I come to the wiki : )

Right now things are fitting nicely into the browser window but it may make expanding a bit tricky later on.

It would be nice if some how the featured video could have more page space. The more we can encourage and reward movie makers the more movies we will see.

The new skill sheet looks great too, nice and convenient, but I do use the old skill list. The old list one is good for making easy comparisons of weapons, damage, recovery time and so forth. Other skill sheets, such as Seppu's, are not good for comparisons. I use the old list a lot and I'd like to see a link to the list some where on the front page, maybe below the skill sheet?

I'v always thought that a 'frequently asked questions' page would be a good idea. There was a 'General Help' page linked to the old wiki front page, I was hoping that people would run with it and start adding questions from the forum but it never happened and the page still only has one question. All the same there is no way that we will ever have a 'frequently asked questions' page if we don't make room where one can grow, I would like it if there was a link to the 'General Help' page found somewhere.

With that in mind, we could change the link named 'Discuss future or past changes of wiki' to simply 'Wiki Discussions' and then make an entry new page. The new 'Wiki Discussions' page would really only be a list of links to other pages such as... the 'Wiki Changes' page, the 'frequently asked questions' page, 'Other Public Discussions', 'Activity' and anything else we like later.

This would keep the nice feel and shape of the new front page but also give us the utility and expanding potential of the old page.

Those are valid points. But there is a few variants to consider.

Featured video will have to be moved into a frame identical to the one used for the skill sheet to be any bigger though, since frames are of fixed sizes. That creates a need to fill the freed space with one more section. The first thing that comes to mind is the video archive, especially since it was missing all along and there is little convenience in reviewing the old ones. They may not even be categorised at this stage. Alternatively, I can just narrow the side plates a bit, but the size increment might not be as significant.

The sheet itself is not meant to be a replacement, rather a quick access reference, but there should be a link to the list indeed.

A list of links to discussions can be put into Community Portal still linked to on the navigation bar. Especially now since it looks somewhat abandoned.

Actually, I do have an idea how to arrange this. So far I'm thinking of a section dedicated to player-made content. Even though I do doubt it serves any practical purpose, plus it ought lack entries for a long time since there's nothing related at all on Muxxu. Video section gets a jump start though (yes, I'm looking at you, PauseMT). Sprite gallery can be put there instead of POI. 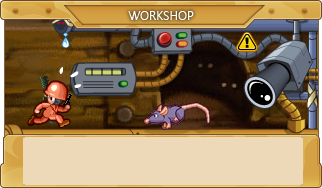 So, the featured montage gets down by one level into the big frame, next to the weekly poll. The skill sheet moves one down as well. That makes some more room either to extend the poll frame to allow for more elaborate polls (still have less then a week), or to fit something else in. Could be, depending on resolutions, one or two featured player-made images as well.

Thoughts? Any other ideas?

Your work is unbelievable KM, I remember when I first met you and I thought you were a bot haha : )
Your the best I'v seen.

Ha! I didn't even remember it until you had reminded me.
All in good fun. Now we need more activity. :3

Am I missunderstanding something here, because I thought I was going to do the poll...

No, you can still do it if you are up to that. Consider it a time span to prepare the polls to come, and to choose which are more juicy. The fist poll is there for the start, to test the layout and show how it will look like. Plus gather some feedback on the changes.

Now that being said, polls are extremely inflexible, so I had some pain setting things up. As it is now, the maximum of options to fit is four. Two of them can be two-liners, others have to fit into one. Oh, and it holds true if the question fits into two lines. Can do the rest of the math from here. Three and two options allow for longer sentences.

I really hate how limited it turned out to be, but I see no other way to incorporate them without breaking the appearance, as of yet.

Oh, once the poll is over, instead of being deleted it should be moved into the archive for those who are late. The archive is set up, so it just takes copy-pasting. I hope moving it doesn't reset the score though, but if they stay in the archive for indefinite time, that shouldn't matter as much, as even more votes can be cast over time.

Retrieved from "https://minitroopers.fandom.com/wiki/Wiki_Changes?oldid=13682"
Community content is available under CC-BY-SA unless otherwise noted.