Wife Beater is a piece of high-tier

Trooper. It grants 30% bonuses to both

Dodge. Unlike most other equipment, it has a visual effect on the owner.

Due to this equipment being bugged, and taking an additional equipment slot which are incredibly valuable, the item is considered to be more trouble than it's worth.

Similar to Take Cover!, a Saboteur with Wife Beater can dodge direct hit of Area of Effect weapons too. 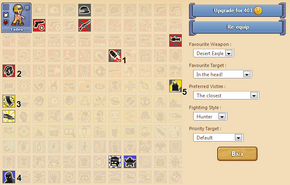 Even though five items are available, equipping Wife Beater will override a trooper's third slot. 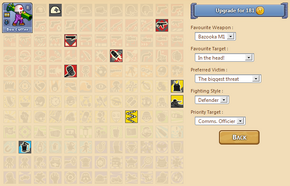 If the item is picked after two other slots had already been filled, the trooper will not have an option to equip it until it gets fourth item.
Add a photo to this gallery
Retrieved from "https://minitroopers.fandom.com/wiki/Wife_Beater?oldid=17774"
Community content is available under CC-BY-SA unless otherwise noted.