Hello all, English is not my first language so feel free to edit my mistakes if you think you can describe it better. Minitroopers is such an awesome game, but I believe that there will be no more updates on the game which is quite sad for me. :(

I wonder why there is no analysis about body parts of troopers in the game. That's the main source of damage a trooper can make in any situation.

To sum it all, body parts can be divided into 6, which can be found too in Favourite Targets section in Stats Sheet-- Head, Right Lung, Heart, Gut, Left Hand, Right Hand, Left Leg and Right Leg.

Damage sources that injure body parts: Fists, any weapons except

Every hits on trooper can affect his performance later, unless the trooper has Hard Boiled which immune to further penalty of injured body parts or received heals from Doctor, not First Aid or Healing Grenade.

Skills like Vicious and Anatomy are best on dealing body parts.

Right Lung -- Increase damage if that part was injured.

Gut -- Increase damage if that part was injured.

Left Hand/Right Hand -- High chances of dropping weapons (unless troopers own Death Grip), increase damage if that part was injured, High chances of not picking up weapons later based on injury level (unconfirmed).

Too much possibility make the research quite tiring at the time, so I will just leave it like this until I have more time to do it. During the research I found that my picture posted on Death Grip and Unforgiving are not quite suitable because I didn't check about the body parts of the troopers involved that time. So I think the damage numbers are inaccurate (not pure damage) :(

A soldier damaged by a knife -- the picture shows only arm's damage. (Injury part) 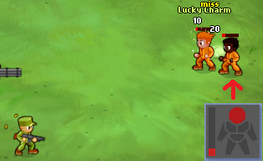 Shot to the injured head can score a very high damage to troopers. 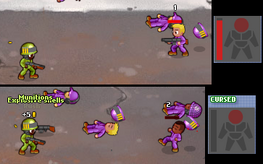 Retrieved from "https://minitroopers.fandom.com/wiki/User_blog:Zenrox/Body_Parts_damage_analysis?oldid=13129"
Community content is available under CC-BY-SA unless otherwise noted.