Tuck 'n' Roll is a low-tier Ability acquired after unlocking the Skill of the same name. It allows the

Trooper to perform rolls on the ground, avoiding sniper shots, automatic, rocket fire, and melee alike. It's also possible to dive out of line of fire while taking hits in case of long

Bursts; similarly the trooper can roll away even being down on the ground and shot at, in which case he will spring back to his feet immediately.

A very useful pick for any trooper, that can save lives pretty often and annoys the enemy. On top of that, footmen with such skill avoid Friendly Fire just the same. Statistically, most productivity can be achieved, when the trooper is facing automatic fire, since a single roll avoids the whole burst, and the longer the burst, the more ammunition is wasted by an enemy. Unlike

Dodger, this ability is multi-use.

The skill allows to dodge Melee like Knives and Fists too, increasing survivability when against melee Shock Troopers.

Possible bug: A trooper dodge a Comm Officer's Desert Eagle with Toxic Shells. However the trooper suffered poison symptom later on, and no "Poison" status on his state sheet. 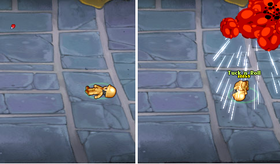 Rare Action 1: A trooper can occasionally pick up weapon which dropped previously. Rare Action 2: If the trooper has Rush and an enemy was under his firing range, he'll return fire after rolling. (Need more comfirmation)
Add a photo to this gallery

Retrieved from "https://minitroopers.fandom.com/wiki/Tuck_%27n%27_Roll?oldid=15986"
Community content is available under CC-BY-SA unless otherwise noted.