Scout is an unlockable helmet (i.e. Specialization or class). Once acquired, it provides +1 global

Deployment bonus, which is capped at

20 maximum. In other words, it allows one to deploy more

Troopers per wave of reinforcements, regardless of a scout's presence in the current or the next wave. The

Binoculars is a scout exclusive equipment.

The Scout is perhaps the only specialization that doesn't improve with each level; the deployment bonus is permanent and doesn't change after the skill is acquired. This alone makes proper upgrading even more essential to ensure that Credits are not being wasted.

However, the whole scout specialization can be substituted for a single perk - Out of Bounds. This perk allows the trooper with the perk to spawn much like a scout, with no cost to deployment, no helmet taken and no equipment slots used. The only downside to this is if the trooper is going to spawn in a vehicle, then Out of Bounds will not spawn him without a cost to deployment. However, you have to count on your troopers being given the option with the skill.

The idea of the scout is to outnumber the opponent on the battlefield. However, the value of the scout becomes debatable when one is faced with explosive weapons such as grenades.

Troopers are deployed at one time, if all 4 troopers are wiped out then the next 4 arrive. Having the scout skill will increase your

Deployment capacity, such as

Reverse Attack and the

Spy specialisation. The scout skill may be viewed as a defence against these 'divide and conquer' strategies.

For example, if your opponent uses

Reverse Attack and your next deployment is lowered from 4 troopers (default) down to 2 troopers, if you had 2 scouts (+1 each), then you would be back up to 4.

The image to the right shows a player using scouts to outnumber their opponent. Note that this player has 3 scouts (4+3=7 deployed) and that no scouts are deployed right now; all 3 scouts are waiting. 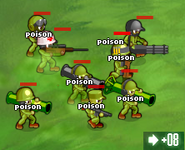 deployments are more likely to get caught by Gas Grenade or any Area of Effect weapons, thus needlessly sacrificing the recruits, especially in Raid and Epic.
Add a photo to this gallery
Retrieved from "https://minitroopers.fandom.com/wiki/Scout?oldid=18012"
Community content is available under CC-BY-SA unless otherwise noted.