Pump Action Shotgun is an unlockable

Shotgun of unique operation. Unlike any other weapon, this model reloads automatically and is perceived as though having good

Capacity, but virtually, the magazine incorporates the whole ammunition load. The important difference being, PAS is not affected in any way by reloading and all relevant upgrades – it's always fully loaded and firing 1 round at a time. Technically, the reloading is done by quickly cocking the pump handle – no kneeling and cartridge insertion speed up the process greatly, making it on par with

Semi-Auto Shotgun if not better.

As any other shotgun, it'd better be utilised in conjunction with

Range, and survivability upgrades, as well as

Special Munitions. For better results and non-stop firing you can back the

Operator up with a 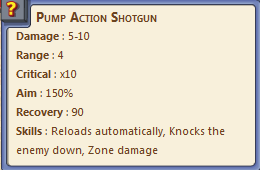 Stats Sheet.
Add a photo to this gallery
Retrieved from "https://minitroopers.fandom.com/wiki/Pump_Action_Shotgun?oldid=17237"
Community content is available under CC-BY-SA unless otherwise noted.