Pick a Fight! is a basic session players can choose in order to gain

Credits, selectable from the

Headquarters. Naturally, it is the only option available for starter armies. By default, there are 3 fights that can be fought each day, which can only be extended with

Trooper with this ability extends the total by one, up to a maximum of five. For every battle won, the player's army is rewarded 2

for every one lost.

Upon selection, there's another page (manually available at "*/b/opp") that's loaded with a selection of armies to fight and an option to input the name of a particular army the player wants to attack. The default target selections are randomly picked in relation to the attacking army's

Power, albeit varying greatly. For the purpose of

Levelling, however, the players are advised to find a 5

army of one Trooper armed with a

Shotgun and a weak Skill and attack it until the desired amount of credits is reached. It's possible to speed the process up by hitting "previous page" button in any browser as soon as the address changes to the one of the battle screen; as a result, the Opponents page will be opened again, already updated and still showing the name of the army you just attacked (up to 2 tries) in the input field. The player should only take mere seconds spent to pass the day's session if the said trick is applied. 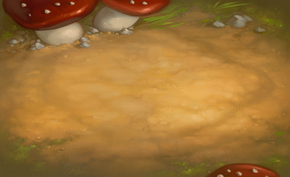 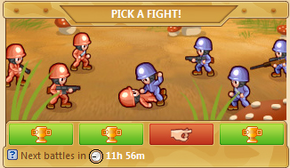 With Commander, the player can attempt up to 5 battles per day, instead of 3.
Add a photo to this gallery
Retrieved from "https://minitroopers.fandom.com/wiki/Pick_a_Fight!?oldid=16969"
Community content is available under CC-BY-SA unless otherwise noted.