Out of Bounds is a passive

Ability tied to a high-tier unlockable Skill. It allows the

Trooper to deploy with no

Deployment cost, essentially making room for one more trooper to be fielded. Additionally, they do not count towards deployed troops, and so do not affect the maximum of 20 grunts fielded at time, able to join on top of that amount. However, the cost stays the same if the trooper is deployed manning a

Spies taking up one of your

Deployment slots. It can be considered cheap as it doesn't use an Equipment slot, and can replace a

Scout in his task, giving you another choice during one of later Level 6 Specializations.

However, given the ever growing upgrade costs, it would make sense taking something improving actual productivity instead of numbers.

Spy is given Out of Bounds and succeeds in deploying on the enemy's side, this Spy won't cost any

Deployment points to the enemy, reducing the Spy's effectiveness since one of their functions is making less enemies deploy in the wave they infiltrate. Also note that the maximum number of spies that can deploy on the enemy's side is 3 and Out of Bounds will not change this.

If the Trooper enters battle within a

Vehicle, the skill's effect will be wasted, since the vehicle's Deployment cost isn't affected, and even if the vehicle is summoned via other means (like Support or being dragged in by an enemy Scout) the deployment cost would be already ignored to begin with. 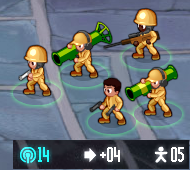 Deployment bonus, a Comms. Officier who own this skill still able to deploy during the battle. 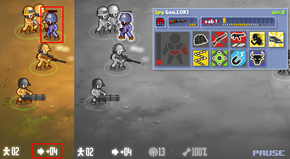 Spies with Out of Bounds won't cost their enemies any deployment points.
Add a photo to this gallery
Retrieved from "https://minitroopers.fandom.com/wiki/Out_of_Bounds?oldid=17833"
Community content is available under CC-BY-SA unless otherwise noted.