Motorcycle is an unlockable unarmed

s of Life Points Damage. It's used occasionally at the start of the battle, delivering the

Initiative. The motorcycle is fairly common and costs no

Deployment Points. Like all vehicles, the motorcycle does not use an Equipment slot, so it is a good addition to any trooper. The greatest effect can be achieved by utilizing it for Assault or Shock Trooper tactics. Troopers with the

Pilot specialization and this skill will ride into battle almost 100% of the time.

The position where the trooper will dismount depends on the maximum

Range of the weapon equipped at the start of the battle. However, if the weapon of choice is

Sabotaged, the driver will abandon the motorcycle immediately, as if deploying on foot, then the trooper will switch weapons and, if necessary, start advancing. The skill

Suspicious can prevent this from happening.

Initiative can fire before the driver has a chance to dismount. However, interception of the vehicle with initiative boosted is somewhat rare. Like all troopers, any motorbike driver dragged in by an enemy's

Binoculars skill will be a sitting duck for some time before being able to move.

If an enemy Spy infiltrates the wave, the trooper will dismount as soon as the spy is in range, effectively countering the spy thanks to the Initiative boost. However, this also means that the biker can't counter any potentially dangerous troopers on the other side of the battlefield, such as snipers.

Testing is under way to determine chances of deployment. See Talk Page.

Bug: A pilot who suffered the dismount glitch got poisoned by Gas Grenade, and is now wandering around the battlefield with no Life Points left (shown in character sheets) until 15

) dealt to him. Then, the pilot will stay stationary until he disappears when the next wave arrive. The pilot will not be targeted by enemies while stationary because he is considered dead. 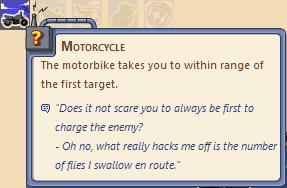 Stats Sheet.
Add a photo to this gallery
Retrieved from "https://minitroopers.fandom.com/wiki/Motorcycle?oldid=17656"
Community content is available under CC-BY-SA unless otherwise noted.