Last Mohican is an unlockable passive

Damage at the enemy's he fires at.

Quite rare ability to see used in the field. Bearing similar dangers of misuse as

Nervous, it's crucial to have enemies closely packed for best results. Facing spread out hostiles, emptying the clip while the damage is doubled is not always necessary, especially when the former is almost full. And so, weapons with minimal capacity benefit from only double damage, not suffering from the risk of burning through all the munitions in one burst. Last Mohican apparently applies to punches as well, replay.

Note: This skill cannot pairs with

Crybaby as the action will make Last Mohican totally useless, unless the trooper is the last survivor of last wave.

Last Mohican in action: Revolver deals 8 - 12 damages instead of 4 - 6 damages. With the help of Loader, the saboteur empty his revolver's clips twice and score a double kill. 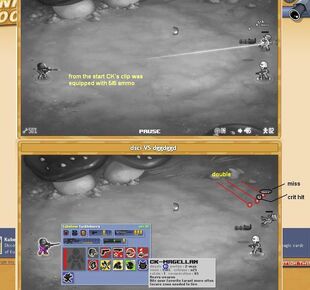 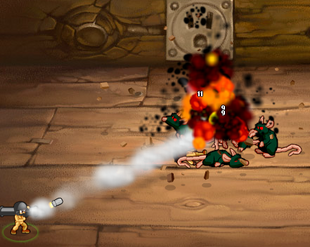 Same like Nervous, the saboteur launched 3 rockets continuously with Bazooka M25 to the group of rats. Note that the whole process doesn't cost any

.
Add a photo to this gallery
Retrieved from "https://minitroopers.fandom.com/wiki/Last_Mohican?oldid=16203"
Community content is available under CC-BY-SA unless otherwise noted.