Helicopter is a rare fast-moving

Vehicle (available after acquiring an unlockable Skill) that can sustain 15

Life Points of Damage, and is shielded with 1

Armor. It comes equipped with

This vehicle cannot be targeted by any

Melee weapons or by Shotguns (directly), so the helicopter is completely safe from Rats. However, if the helicopter runs out of ammunition, the pilot doesn't leave the cockpit. Instead, the vehicle disengages and leaves the battlefield, and the pilot is never seen again for the rest of the battle.

Additionally, helicopters have complete immunity to

Gas Grenades. However, the vehicle can be easily caught in the Bullet Spread so common for

automatic weaponry. Due to the vehicle's elevation, such instances look odd. If you pay attention to the shadows and green circles, though, it's clear that the entity is (technically) positioned correctly for that.

To get a vehicle deployed more often, one can specialize and level up

Pilots, improving the odds of fielding one by 25% of the initial percentage for each new level. Testing is ready to be started (need helicopter owners) to determine chances of deployment. See the Talk Page.

Some skills used by troops can also work in conjunction with vehicles. You can access and contribute to the research on the Vehicles and Skills page. 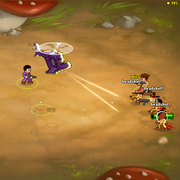 Either great luck, or a proof that the trooper inside the helicopter is more likely to hit its favourite target.
Add a photo to this gallery
Retrieved from "https://minitroopers.fandom.com/wiki/Helicopter?oldid=18203"
Community content is available under CC-BY-SA unless otherwise noted.