Heavy Tank is a very rare

Vehicle tied to a high-tier unlockable Skill. It comes equipped with a

Fixed Machine Gun v2, which are better than the ones installed on

Light Tanks by a notch. The vehicle is as tough as 50

Life Points, and is shielded with 3

Armor. On average, the vehicle can hold for three hits with explosives.

To use the vehicle more often, one can specialize and level up

Pilots, improving the chance of deployment by 25% every new level. Testing is ready to be started (need tank owners) to determine chances of deployment. See Talk Page.

It is assumed that the heavy tank operates in a way that is similar to other combat vehicles. As some trooper skills are useful to other vehicles we can assume they will also be useful to a heavy tank. See Vehicles and skills.

Here is a video showing a bot owned Heavy Tank in combat: Video.

The image to the right was taken from the previous video. The heavy tank seems is need 8

Deployment Points to enter the field but will only use 6 points itself. Heavy tanks have also been seen in armies with 8

Deployment Points and going into combat with 2 troops.

Because of this an army without four or more

Scouts cannot deploy a heavy tank. You may also want to see the page for Vehicles: Deployment.

Here is a link to a player owned army with a Heavy Tank, Berewea

If a Heavy Tank is alone on the field there is a high chance of it retreating.

If the team has a Heavy Tank alone, enough points of

Communications (10 or more) and against many enemies (4 or more) there is a very high chance, that the next order the tank receives will be "Retreat" ( not "Solo mission").

This is due to an AI problem, which decides that in this situation your forces are outnumbered. This can happen even if the tank is undamaged or has 1 other friendly trooper still supporting it. 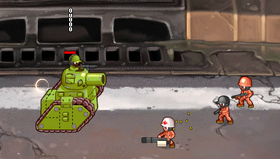 Due to the high Armour rating, heavy tanks are completely impervious to small arms with minor Damage. The example shows a

Minigun; its damage is 2-3 while the tank can block as many as 3 points of damage, rendering the minigun completely useless. 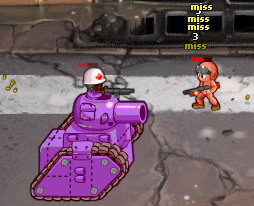 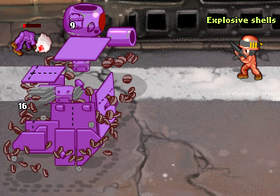 A player-owned orange heavy tank deployed during a Raid. Image provided by taringa. The tank owner is unknown.

Orange heavy tank (by the courtesy of Chitzunr1). 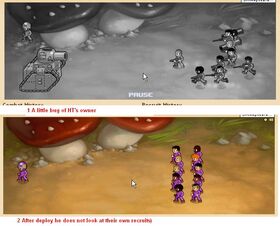