The standard Grenade is low-tier

Trooper. Upon impact, it explodes with an

Damage initially and Fall Damage as a bonus.

Also, troopers can kill themselves of their friends with their own grenade due to its low accuracy.

The grenade can deal high Damage, killing weaker troopers. Troopers who survive may need time to get back to their feet and reacquire their targets. It is a very useful weapon, but isn't entirely accurate when thrown unless the trooper has the skill

As with all explosives, grenades don't hurt the target's limbs or vital organs directly, dealing Damage generally instead. Nevertheless, weapons carried by the victims can still be occasionally dropped if the target does not have Death Grip.

Aim is not overly good.

High concentrations of hostiles are the best targets to use grenades against: one or two will be caught in the Blast anyway. 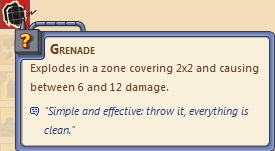 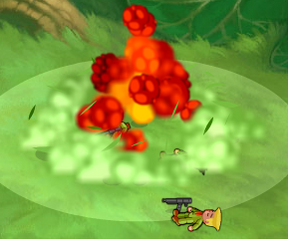 Don't know if there is a reason, but it doesn't seem to affect moving targets. 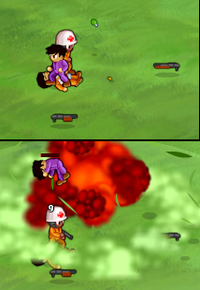 The Grenade doesn't seem to affect the user, even when it explodes in his "AoE" area.
Add a photo to this gallery
Retrieved from "https://minitroopers.fandom.com/wiki/Grenade?oldid=17183"
Community content is available under CC-BY-SA unless otherwise noted.