Trooper uses a jet, they do not take part in the battle directly. Instead, the jet will occasionally perform a bombing run, the bombs have firepower similar to a hit from a Launcher. The jets will inflict Damage measuring 6~9

Life Points with Fall Damage as a bonus. The jet can't be shot down, damaged, targeted, or even selected (hence theinability to be targeted – the trooper himself isn't deployed in person), the jet being a whole another entity.

The major downside of this vehicle is that its owner does not participate in battle at all and so the jet's payload may not be worth the loss of this one trooper.

To use the vehicle more often, one can specialise and level up

Pilots, improving the chance of deployment by 25% of the initial percentage on every new level. Testing is ready to be started (need jet owners) to determine chances of deployment. See Talk Page.

The jet may bomb the battlefield more than once, Team Jay VS Gunshoot.

Some people claim that the fighter jet has a higher chance to bomb the battlefield more often in the same fight if the trooper flying it is a high-level pilot.

However, we do not have sufficient proof to say this is true at the moment because only a few people have this vehicle, and even fewer have a pilot with one.

A level 11 scout with a fighter jet 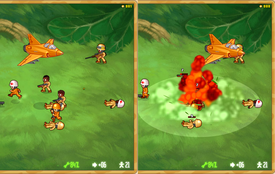 The Fighter Jet might be capable of avoiding Friendly Fire when bombarding enemies.
Add a photo to this gallery
Retrieved from "https://minitroopers.fandom.com/wiki/Fighter_Jet?oldid=17672"
Community content is available under CC-BY-SA unless otherwise noted.