The Dual Pistols are

Handguns known for their stylish look when used on the field. The dual pistols are unique in the game as these pistols are the only way that a trooper may wield two weapons at one time. Each pistol is only slightly better then the default

Pistol but combat effectiveness is increased as the trooper will be discharging two rounds per shoot within the same time frame. This doubles the

Damage potential to 6-8 and not 3-4 as stated. This is the highest damage of any

Handgun, higher then any Rifle and respectable when compared to other weapons.

Each bullet fired by the dual pistols is completely separate from the other. Each bullet has it's only

critical x20. Again the highest of the

Handguns and respectable compared to others.

Killshot with the second or... they might score a

Killshot with the first bullet, triggering the enemy's Lucky Charm skill, and then finish the enemy trooper off with the second bullet.

Another very rare trick with the dual pistols is that they can deliver fatal damage to an average trooper with their opening shot. The average trooper has 10 Life Points, for a weapon to be fatal with only one shot (failing the

Killshot) they must be delivering 10 or more damage in total. The dual pistols are limited to a maximum of 8 damage, however each bullet is completely separate to the other, and so the second bullet can benefit from a wound created by the first bullet, this can bring the grand total over 10 damage becoming fatal.

Dual pistols work well with Nimble Fingers as one of the problems with these weapons is that they will need to be loaded with an even number of bullets to remain effective. They also work very well with Trigger Happy, doubling the bullets to a total of 4 per shoot and a potential damage of 12-16. Keeping in mind that their aim is only a low 80%. 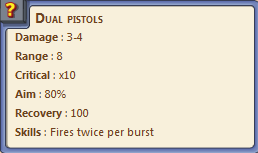 Stats Sheet.
Add a photo to this gallery
Retrieved from "https://minitroopers.fandom.com/wiki/Dual_Pistols?oldid=16869"
Community content is available under CC-BY-SA unless otherwise noted.