Charge is an unlockable active

Ability. It allows the

Trooper to break ranks, rush forward towards the enemy (up to a

Range of about half a screen), and ram them for

Life Points (injures limbs as well), knocking them down on the ground – all in one turn. A very handy pick for any short-ranged front-line trooper, as they can follow up the charge with a quick finisher or trample the victim to death if they have enough

Initiative. Don't expect your trooper to survive against Rats for long, though. Charge is not considered a useful skill for Support Troopers as neither

Launchers can fire at short

Below is an image of a

Scout, the charge damage is 22. The scout is 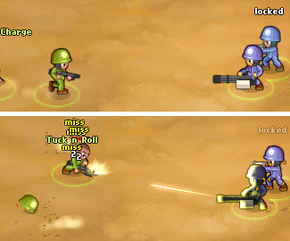 Unlike other active skills, Charge takes a little Turn

before reaching the enemy. During this period, it can be stopped by weapons. 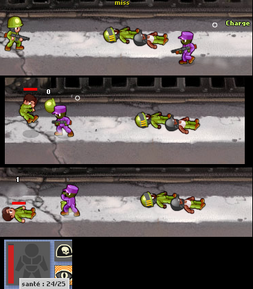 HP scout who has 9 damage of Charge attack using his second charge on Soldier. The Charge caused damage to the Soldier's head, but the Helmet protected him from damage.

Charge Damage - Click to Enlarge
Add a photo to this gallery

A vidoe of a Pilot using charge.

In this video, the Charge skill does 12 damage. Perhaps this can be justified as a base number of 6 damage and then multiplied by a head shot 6x2=12.

52 damage on a Trooper. Note that this was done by a soldier.
Retrieved from "https://minitroopers.fandom.com/wiki/Charge?oldid=18031"
Community content is available under CC-BY-SA unless otherwise noted.